Shabazz Palaces (US) at Valby Kulturhus

A Colossal Weekend, Colossal and Vega 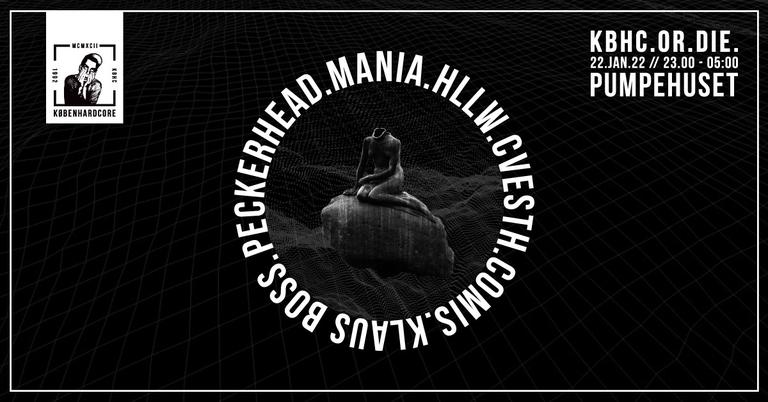 WE'RE BACK FROM THE DEAD - KØBENHARDCORE OR DIE!

WE HEREBY WELCOME YOU ALL BACK TO COPENHAGENS HARDEST, TOUGHEST AND MOST GENIUINE HARDCORE TECHNO RAVE!

HLLW:
We proudly present an old Norwegian / Danish friend, a friend with an unique talent and a true artist who's emerging from Copenhagen´s scene and part of Asquith´s Lobster Theremin label (London, UK).

His sets and productions are characterised by an immense diversity and creativity - With liveset's that only contains unreleased music by HLLW himself - Diving into several styles and sub-genres.
Pulsating Techno melting into psychedelic, trippy Electro, Trance and Acid sounds with a special atmospheric touch.

We promise you that he will take you on a journey and stimulate your mind with impulsive, thundering sounds.

Recently back from the very roots of Gabber music, Rotterdam, he's now back in Copenhagen to demolish your nerves! He is your main man for unadulterated energy in the studio and on stage. On the dancefloor he spans wide, from the early nineties hardcore genre, to his own powerful productions and to a more extreme concept "fast and hard". With tireless energy and a good understanding of the genre's standards, his productions is always worth listening to.

KLAUS BOSS:
With performances all over Denmark, The UK, Sweden, Norway and Czech Republic he has seen and conquered more than most. 30+ years deep into the game there's no sign of him stepping down nor lessen his passion for an extremely varied palette of music.

Currently, alongside Peckerhead, he's running the well-known Københardcore concept of Hardcore Techno, Drum'n'Bass, Acid and all sorts of intense styles of music. Although it would be the obvious modus operandi of most to pigeonhole him into just that, Klaus Boss always defies stigmata and can easily incorporate any kind of music into his mesmerizing sets.

Other than Københardcore, the Boss man has been a part of the Superhoe collective for many years as well as the booking group for the annual Click Festival music programme in Elsinore.

MANIA:
The Swedish female DJ, with a deep passion for the dark, crispy vibe of
industrial hardcore and crossbreed.

For Mania, music production started in 2015, after being fascinated by the Industrial sound and wanted to dig deeper into the genre, she got hold of her very first workstation and started her true journey. Shortly after, her first Swedish bookings started to appear, the European bookings were undeniably moving in as well - Mania has played all over Europe, constantly impressing the crowd by bringing some of the hardest, heaviest sets of the night.

She teamed up with Toxic Sickness radio in 2017 and has been a resident DJ on their radioshows, delivering her own podcast every month.

For the moment Mania is now taking a break from Toxic Sickness to focus more on own productions and powerful performances, make sure to set a big fat X at her timeslot at KØBENHARDCORE the 22nd of January!

Originally from the Northern part of Sealand, he turned the attention towards CPH in the early 90´s and became a part of the local trance community around the “KennedyClub” raves in downtown Copenhagen. But something was missing at the raves, and the love for the gritty 303 rave sound lead him to the underground parties, by the DJ-collective: “Turbulent Freeparty /Copenhagen”. Which he later became a resident part of in 2001.
“Turbulent Freeparty” had the last freeparty in 2017.

Have spend almost two decades of involvement in volunteering and supporting the community, organising underground parties and dj’ing on the Danish Hard-/Acidtechno scene, mainly in Copenhagen.
Turbulent Freeparty was twice a month, (two days in a row) in a bunker at a public park. True 303 warriors, with good core values: Free entrance and cheap beers.

"Comis" has a love for the old Belgium and German HardTrance and UK pounding Acid-Techno and still plays ONLY vinyl.

CVESTH:
Real name Christian Vesth, is a DJ and producer from Copenhagen, Denmark.

He began his journey in the early 90’s after discovering the local techno community and the parties around it.
Hooked on the music he started DJ’ing and got involved in promoting parties around Copenhagen.

In over two decades CVesth was heavily involved in the danish Hard-/Acidtechno scene in Copenhagen. As co-founder of Turbulent, a freeparty organising group from Copenhagen, he was part of the first danish Hard-/Acidtechno underground scene in Copenhagen, back in 1995, running the “Acidmoves” and “1st Target” parties through the late 90' and the “Turbulent Freeparty” series throughout 00', held in a bunker every month.

Today CVesth is now focussing more on producing harder pounding techno and acidtechno, which mainly comes out on his smaller label, Repetitive Underground, heavily inspired by all the fine releases from the 90’s and 00’s."

This event has been added by Highpass contributors.

if you know that any of this information is out of date, please let us know.